I Thought I’d Heard It All About Creatine…

Until I started doing research for this post. That’s when I began stumbling onto article after article reporting that serial killer Elliot Rodger had become “hooked on creatine” and it’s rage inducing side effects. Digging deeper, I learned that the Daily Mail, the Mirror and others had fallen for an elaborate hoax.

Nevertheless, I think this story perfectly encapsulates the general public’s perception of creatine. My girlfriend, for example, still doesn’t believe that creatine’s not steroids and thinks it’ll give her kidney stones.

Creatine, Not Even Once 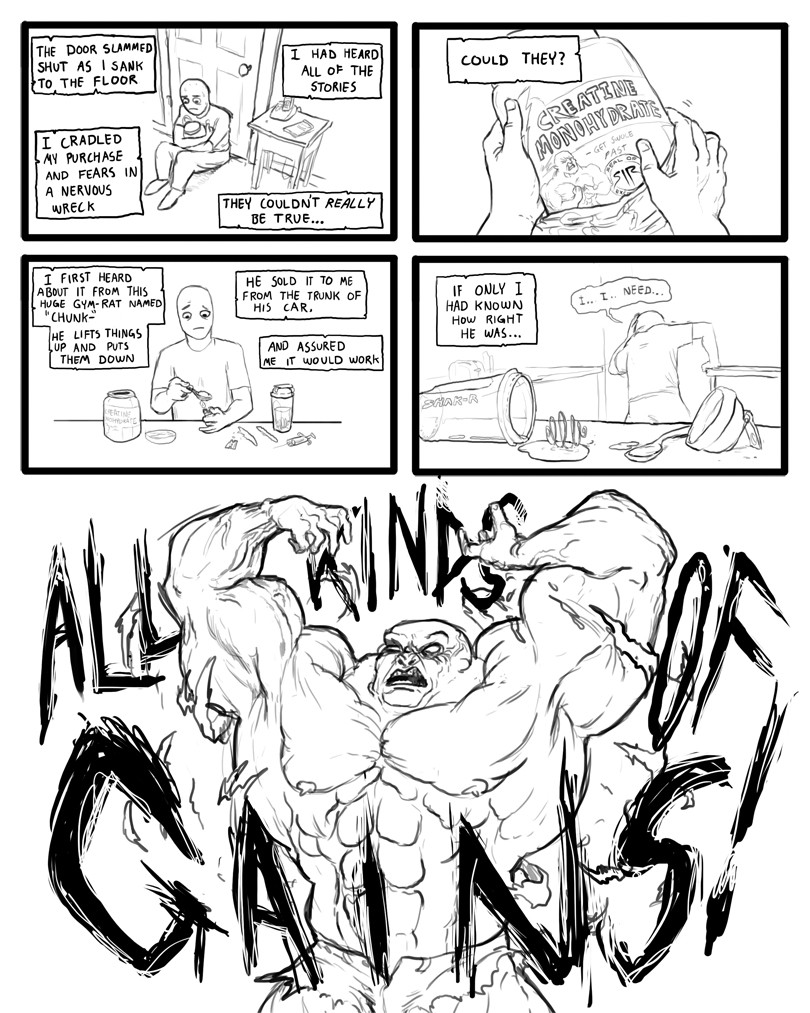 And that’s why I wrote this list. To dispel the myths and to teach some truths about the world’s most misunderstood supplement. Don’t be fooled by the list format, this isn’t a quick blog post. It’s a deeply researched, science based, comprehensive, long-form, nuanced and evidenced backed report on all things creatine. Clocking in at over 2,200 words, this post is about an 8 minute read.

Without further ado, ladies and gentlemen…

The 7 Myths Of Creatine

1. It’s Only For Body Builders

There’s a common misconception that supplementing creatine may help you get swole, but at the sacrifice of general performance and/or athleticism (maybe folks think you lose flexibility?).

Those with a little more knowledge on the subject argue that only some athletes stand to benefit. Athletes who need sudden, high intensity bursts of power and strength are ideal candidates for creatine supplements. These athlete might include powerlifters, bodybuilders, sprinters, football, baseball, and basketball players, and the like. Those who engage in sports with steady aerobic output, the argument goes, may not benefit from creatine use.

The common story is that creatine is only involved in the first ten seconds of super high intensity exercise (more on this later), but the truth, as usual, is more nuanced.

“Increases in energy expenditure usually invoke the utilization of all metabolic systems.”

Essentials of Sports Nutrition and Supplementation.

Contributions of the metabolic systems to intermittent sports like tennis, football, baseball, wrestling, BJJ, Muay Thai and Boxing are still somewhat of a mystery. But the general rule of thumb stands – creatine improves performance in almost any athletics competition and training environment.

Over the course of this article, I hope you will see that all athletes and in fact, most people stand to benefit from creatine supplementation.

The short answer here is no. For those with healthy kidneys, definitely not. If you have impaired kidney function, although any damage is very unlikely, you should still check with your doctor.

There are a lot of studies out there specifically on creatine and kidney function and, so far, zero observed damage. One study even looked at a man with only one kidney. He took 20g of creatine a day (4 times our recommended dosage) and no problems were found.

Perhaps this myth persists because of confusion between creatine and it’s waste product, called ‘creatinine’ (who names these things?). ‘Creatinine’ is a diagnostic criteria for kidney problems. Consumption of creatine might give you a false positive on kidney test, but in no way is it actually harmful.

3. You Gain Nothing But Water Weight

You might’ve heard creatine bashers say “you gain nothing but water weight,” or that your cells “inflate like little water balloons” while on creatine. That’s partially true; you DO gain water weight. Creatine causes water retention, sometimes up to 5 pounds at higher “loading” doses. But it also gives you more energy for training – promoting muscle growth and weight loss.

Trying to make weight or trying to get cut? Water retention might be a concern for you. In these cases, cycle off before the big date, but in general cases the benefits far outweigh this temporary concern.

So, yes, you will gain (retain is a better word here) water weight, but you’ll also gain so much more.

4. Creatine Is Not Natural

Meats that are good sources of creatine

However, According to the NHANES III survey of American adults, the average man consumes 1.08g and the average woman consumes 0.64g of creatine. This ends up being much below our maximum stores of 5g. If you are consuming less than 5g of creatine from the natural sources listed above, it’s worthwhile considering supplementation, for the reasons I’ve covered already and reasons I’ll cover in the rest of the list.

All that being said, if you are supplementing creatine (creatine monohydrate, typically) you are ingesting synthesized creatine. Synthetic creatine is usually made from the naturally occurring compounds sarcosine and cyanamide. These compounds are combined in a reactor and the reactor is heated and pressurized, causing creatine crystals to form. The crystalline creatine is then purified by centrifuge and vacuum dried. The dried creatine compound is milled into a fine powder for improved bioavailability.

This process would probably not fit your definition of natural.

Here are some examples of the research done on the safety of creatine:

At the end of the day, if you don’t feel like reading all these studies, you’ll have to take my word for it. Creatine is safe as safe can be.

(Nevertheless, the lawyers still make me say this: If you have a previous medical condition or are pregnant or breastfeeding, please consult with a doctor before starting any new diet or supplementation program.)

6. Creatine Is A Steroid

So, the scientific definition of steroid is pretty specific – any compound that possesses a common structural feature – 4 conjoined cycloalkane rings.

The generalized definition of steroid is a bit broader. Basically, it’s an illegal drug that helps you get big. Also called anabolic (tissue building), these drugs have the same cyclic steroid ring system and have similar effects to testosterone in the body.

Creatine, on the other hand, is a tripeptide compound, made up of three amino acids (L-arginine, L-glycine, and L-methionine), with no rings to speak of.

Creatine also is not illegal and it doesn’t influence hormones in an anabolic manner typical of ‘steroid’ compounds.

By all these definitions, creatine is not a steroid.

7. Elliot Rodger Was Hooked On Creatine

C’mon seriously? Already covered this one in the intro.

Looking to get some Creatine?

Our Advisor, Tony Ricci (PhDc, FISSN, CDN, CNS, CSCS) recommends brands that use CreaPure -creatine manufactured in Germany to the highest standards of purity. Optimum Nutrition Creatine Powder is the #1 Best Seller on Amazon and uses CreaPure. – affiliate link, to help support the writing of our science backed posts[/box]

The 4 Truths Of Creatine

1. You Need Creatine To Put In Work

This is somewhat simplified, but here we go.

ATP and CP are primarily involved in the first ten seconds of very high intensity contraction. The ATP molecule has three (the T in ATP) phosphate ions bound to it, with a large amount of energy stored in that third bond. When the bond breaks, the energy is released and used by the cell to do work.

When you’re working hard, you run out of ATP real quick. The CP rebuilds ATP, but it runs out real quick too. That’s where creatine supplementation comes in. The ingestion of creatine monohydrate can help increase CP stores, increasing the amount of work you can put in.

Interestingly, high intensity exercise promotes creatine transport into the working muscles, so a positive feedback loop is created between hard work and creatine supplementation, reinforcing each other.

2. Creatine Is For Smart People

When it was first established that creatine monohydrate could help us train harder, the bodybuilding community fell in love with this supplement. But personally, I find the recent research coming out about creatine much more tantalizing.

It’s not just good for our bodies, it’s great for our brain.

How so? Glad you asked!

Excitotoxicity is when nerve cells are killed via excessive stimulation by glutamate (a neurotransmitters). The latest research suggests creatine protects against glutamate-induced excitotoxicity by providing a cellular buffer of energy.

The neuroprotective effects of creatine also present themselves in the production of dopamine. You might have heard of dopamine as the happiness hormone. On the other side of that coin, diseases like Parkinson’s are associated with the loss of dopamine-secreting neurons.

These effects are due to creatine acting as an energy reserve. The longer a cell has energy, the longer it can preserve the integrity of the cell membrane. In short, cell energy equals cell life, especially in the brain.

3. Creatine Is For Old People

Age ain’t nothin’ but a number.

And it’s not the number that gets you.

Most scientists agree, the body’s decline is due (not to the passing of years, but) to the combined effects of inactivity, poor nutrition, and illness. These factors are within our control – meaning the ageing process, if only temporarily, can be slowed.

Loss of muscle mass, also known as Sarcopenia, is the number one biomarker associated with ageing. Sarcopenia produces a lot of negative metabolic changes that present themselves as bad health in older individuals. These include a decrease in resting metabolic rate, leading to a higher prevalence of insulin resistance, type 2 diabetes mellitus, dyslipidemia, and hypertension.

The number two biomarker of ageing is strength loss. The importance of strength in the elderly can be exemplified simply as the ability to get out of a chair or avoid a fall. Additionally, a study of 8,762 men analyzed the correlation between strength and longevity. Nineteen years later, we learned that death rate was highest in the one-third of men who were weakest.

And creatine monohydrate is the most effective nutritional supplement for improving muscle mass and strength.

In fact, creatine’s effect on these biomarkers of ageing was tested specifically in an elderly population! A double-blind, placebo-controlled study of thirty men, average age 70.4 years, who underwent a weight training program with creatine supplementation, found greater increase in fat-free mass, knee extension strength and endurance, leg press endurance and overall power in the creatine group vs the placebo group.

That’s not it though!

Finally, in another double-blind placebo-controlled study of just 7 days of supplementation in the elderly found increases in body weight, fat-free mass, and strength. Importantly, this study included a timed repetitive sit-stand test (basically getting out from a chair). On this measure especially, the creatine-supplemented folks outperformed those given a placebo. The authors concluded:

“Creatine supplementation may be a useful therapeutic strategy for older adults to attenuate loss in muscle strength and performance of functional living tasks.”

Basically, I’m writing this section for my grandma, because I love her and I hope she listens to me and adds 5 grams of creatine to her daily regimen.

4. It Helps You Lose Weight

Eating 5g of creatine won’t add any calories to your daily intake. On the other hand, it will give you some extra energy so you can burn more calories, especially with high intensity workouts.

You are using HIIT for weight loss, right?

To sum up, if you’re an athlete, care about your brain, or are a few years past your midlife crisis – you should be supplementing creatine, especially if your diet is lacking in theses foods:

You need to eat about 2.2 pounds (1kg – uncooked weight) of beef to get the amount of creatine (5g) we recommend. And most of us just won’t ingest that much meat in a day.

It’s safe, it’s healthy, it’s cheap, and for most people, it just works. Get some Creatine Monohydrate, take 5g a day, and you’re good to go.
– Kurtis Frank, Examine.com Co-Founder

Note: I used Examine.com for a large portion of the research for this article. As an independent and unbiased organization that does not sell any supplements, they focus on the actual scientific evidence when it comes to supplements and nutrition. They currently have over 36,000 references to scientific papers. I highly recommend the Examine Supplement Guides.

9 thoughts on “About Creatine: 7 Myths That Just Won’t Die and 4 Unappreciated Truths”